Rent to Own Homes in Michigan

Michigan is a state that's full of surprises. The Wolverine State is the only state in the country divided into two distinct peninsulas, and it's a place where agriculture, academia, industry, and Motown have found a way to thrive together. It's a manufacturing hub and the corporate headquarters of America's top automobile manufacturers. It's also an outdoor lover's paradise with more than 100 state parks and recreation areas that cover 10 million acres of public land.

Bordering four of the Great Lakes, Michigan has the longest freshwater coastline in the United States and more shoreline than California. This does more than give the state's lower peninsula its iconic mitten-shaped look. It provides a backdrop for an array of outdoor activities, including fishing, boating, and golfing. These are just some of the reasons people are smitten with Michigan and are choosing to call it home.

Check out 296 Michigan rent to own homes for sale, which may include auction properties, for sale by owner, and more.
Hot 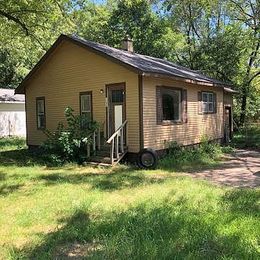 Search for rent to own homes in cities near Michigan

Average Cost of Living in Michigan

Overall, the cost of living in Michigan is lower than the rest of the country. However, this isn't true in specific areas, like Lansing, Kalamazoo, Saginaw, and Grand Rapids, where the cost of living can be as much as 12% higher than the national average. Food and transportation costs remain close to national averages. And, despite unpredictable weather, energy costs tend to be lower than other states in the region, due in part to the way breezes from the Great Lakes affect the climate.

If you're interested in Michigan rent-to-own homes, don't forget to consider important factors in addition to monthly living costs, such as average commute, taxes, crime rates, etc. The following are some common Michigan statistics compared to the U.S. national average.

The physical division of the upper and lower peninsulas reflects the diversity of the state. Whether you're looking for the seclusion of the wilderness, the action of a city, or the charm of a suburb, you can find the right neighborhood for yourself in Michigan's most popular cities.

It's impossible to ignore the stunning natural beauty of Michigan, and that's one reason why the most popular spots in the state are in the great outdoors.

With its diverse cities, landscapes, outdoors escapes, public universities, and revitalized economy, there are plenty of reasons to consider Michigan.