Rent to Own Homes in Ohio

What do James Garfield, Ulysses S. Grant, Warren G. Harding, Benjamin Harrison, William H. Harrison, Rutherford Hayes, William McKinley, and William H. Taft have in common? These eight U.S. presidents were either born or raised in Ohio, which is why the state is sometimes called the "Mother of Presidents." Although Harding, the last Ohioan to serve as president, died during his term in 1923, Ohio continues to maintain political relevance. The state typically holds its presidential primary elections in March, much earlier than most other states, making it an essential stop for early presidential campaigning.

Ohio has an excellent economy. Its GDP of over $650 billion is the seventh-largest in the country. Major industries include aerospace and defense, bioscience and health care, education, agriculture, iron and steel, and motor vehicle assembly. The state manufactured $112 billion in goods in 2018 and exported more than $50 billion to foreign countries. Nearly 700,000 of Ohio's 11,689,100 residents work in the manufacturing sector. A growing economy, affordable real estate market, and a wide variety of housing types make this state an excellent choice for people looking for rent-to-own options.

Check out 296 Ohio rent to own homes for sale, which may include auction properties, for sale by owner, and more.
1 of 30 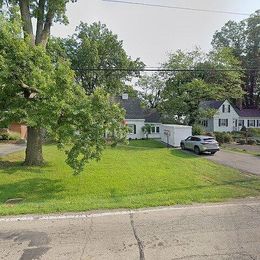 Search for rent to own homes in cities near Ohio

Average Cost of Living in Ohio

You won't have to look too hard to find an affordable place to live in Ohio. The overall cost of living in the state is 17.4% below the national average. Categories such as groceries, health, housing, and transportation are relatively affordable throughout Ohio. Akron and Youngstown are 13% and 17% cheaper than the rest of the state, respectively. Cleveland, Toledo, Canton, and Dayton range between 8% and 11% lower than Ohio's average, while Columbus and Cincinnati are two to three percentage points higher than the state average. There are more expensive municipalities - the cost of living in Dublin is 18% higher than the national average - but it's fairly simple to find a city in Ohio that's within your means.

The median cost of a home in Ohio is $140,700, which is more than $90,000 cheaper (30.1%) than the national average of $231,200. Many cities have affordable housing markets even by state standards. Prices in Youngstown, Dayton, Cleveland, Akron, and Toledo range between $42,700 and $68,500 - just a fraction of the U.S. average. In mid-range cities, such as Canton, Cincinnati, or Columbus, you'll pay between $98,900 and $157,700 on average. A more expensive city like Dublin has a median price tag of $397,600. If you're looking for inexpensive housing markets, there are plenty of them in this state, including many with rent-to-own opportunities.

If you're interested in Ohio rent-to-own homes, don't forget to consider important factors in addition to monthly living costs, such as average commute, taxes, crime rates, etc. The following are some common Ohio statistics compared to the U.S. national average.

Columbus - The state capital and home of Ohio State University is a growing city with nearly 900,000 residents in 2019 - up 13.9% since 2010. State buses, a bike-share system, and free golfcart shuttles make getting around the city a breeze. Columbus has a growing economy with plenty of jobs. The Scioto Mile, a 175-acre park area in the middle of downtown, features play areas, walking and biking trails, canoeing, kayaking, a restaurant, and outdoor concerts and festivals.

Cleveland - With a population of 381,000, the second most populated city in Ohio has lots of appeal. Cleveland has plenty of sports pride with teams such as the Indians, Browns, and Cavaliers. A mix of urban and suburban neighborhoods makes it easy for people to find an environment that suits them. The Cleveland Metro area boasts a gross metro product of $132.9 billion, with a median household income of $53,851. There are many cultural institutions in the city, including the Cleveland Museum of Art, which had nearly 770,000 visitors in 2018. City visitors and residents enjoy the Metro Parks, which include 23,700 acres of open space, hundreds of miles of trails, eight golf courses, lakefront parks, and the Cleveland Zoo.

Cincinnati - The Queen City has a population of 303,940, making it the third-most populous city in the state. Its $134.8 billion gross metro product is the largest in Ohio. Cincinnati was number 44 on Forbes' list of best places for business and careers in 2019. The city has a full line of attractions, including the Cincinnati Zoo and Botanical Garden, the Cincinnati Art Museum, Coney Island Amusement Park, and a host of public parks for sports, recreation, and relaxation. The municipal government uniquely maintains almost 400 sets of steps to help pedestrians make their way around the city's hilly areas.

Popular Amenities and Attractions in Ohio

Ohio has dozens of rivers and more than 100 outdoor parks and recreational experiences for public enjoyment. Hocking Hills State Park is a great spot for children, adults, and people with disabilities. The park has more than 100 electric sites with heated showers, laundry bathrooms, playgrounds, and a swimming pool. Rent cabins on-site, go fishing at Rose Lake, hunt, enjoy a picnic, or go hiking and biking on trails ranging from 0.25 to 6 miles.

Go back in time by visiting the Piatt Castles, built more than 150 years ago. You can learn about the Piatt family dating back to the 1820s, see how they lived, check out some of its original furnishings, view Civil War artifacts, photographs from the late 1800s, and a pre-1900 book collection. The museum hosts events throughout the year that provide a hands-on feel of the various eras the family lived through. If you want more of the old-time experience, spend the night at the Great Stone Castle, where modern amenities meet historic design and architecture. The 125-year-old structure now serves as a bed, breakfast, and spa.